How Strict Should Parents be with Teens 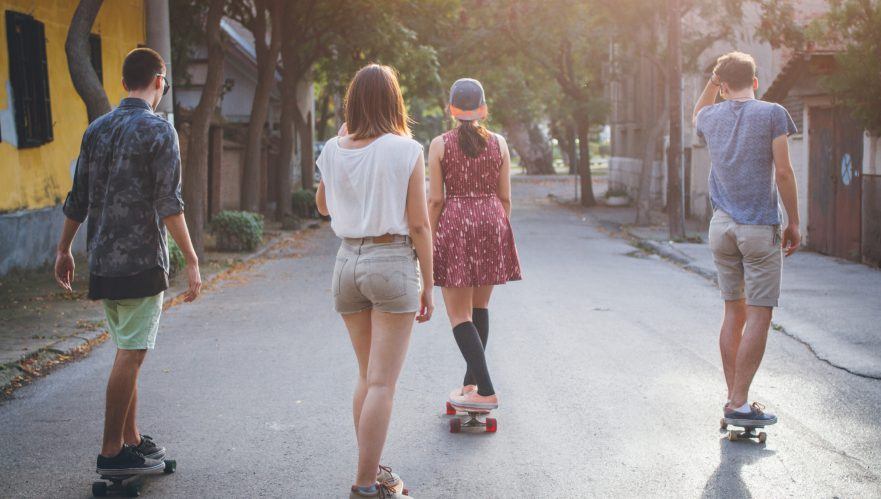 From the moment we become responsible for raising a child we begin a never ending balancing act between being too over protective or too lenient with our children.  Both extremes are not ideal so we look for the middle ground.  With teenagers this struggle becomes very real when we worry about what they’re doing when we’re not around.  We have to let go but we also feel such a deep urge to hold tight and keep them safe.  In search of finding this balance, we checked in with best selling author, pediatrician and parenting consultant, Dr. Cara Natterson for some helpful advice on how to handle teenagers, specifically when it comes to their monitoring their exposure to drugs and alcohol.

Do I need to lock up my liquor?

In one word… Yes!

This is not for lack of trusting your child. You may have the most trustworthy, rule-following, most cautious kid on the planet, but consider this:

Your kid’s brain is not fully mature yet, and we know when peers are around, the brain relies upon its emotional epicenter to make decisions. This explains why a really “smart and good kid” can wind up doing something impulsive and dumb.

Leaving everything wide open puts your child in the position of being the policeman when friends are over. Spare your son or daughter from being in that uncomfortable spot. Give them the opportunity to tell their friends how awful and strict you are instead. Most kids tell me they are relieved to be able to throw their parents under the bus and save themselves from having to otherwise navigate out of a tricky, or even dangerous situation.

Is it better to not make drinking such a big deal and let them sip from my wine or have a beer every once in a while like they do in Europe?

There are different views on this and yes, minimizing the allure of something by reducing restrictions around it, does sometimes lead to moderation. If you let your kid sip your wine occasionally, maybe he/she will be less likely to binge drink when alcohol is finally available (legally, or just socially when you are not around). The problem with this reasoning is the word maybe.

For argument’s sake, let’s substitute alcohol with candy. In every instance I can think of, where having candy around the house makes sugar less alluring to the people who live there, I can think of the counterbalance of that. For example, a child who struggles with weight and food choices tends to point out, that the ease of access to sugar while growing up, is the culprit.

If kids’ brains were fully developed and the playing field was level with adults, I would probably lean more towards the casual approach. But tween and teen brains (and yes, also the brains of 20-somethings who can legally drink and consume marijuana in many states as well), are still very much under construction and we know quite definitively that exposure to addictive substances at younger ages results in higher rates of addiction.

How do kids get introduced to prescription drugs?  How common is it? Why are some drugs helpful to some minds and dangerous for others?  Is this the opioid crisis we’re hearing about?

Prescription drugs are everywhere: doctors write for them, particularly with recovery from surgery; some people take them to address learning issues or depression caused by neurochemical imbalances; and the older a person is, the more likely their medicine cabinet has a stash of these old meds that simply never got thrown away. As parents, we are all over alcohol and marijuana. But because prescription drugs have a beneficial use, we tend to forget that they can be abused, even in light of the opioid crisis in the US. Abuse of prescription drugs is incredibly common among teens because they are so accessible, not to mention that there isn’t a tell (like a scent, for instance) when you just swallow a pill. The topic is massive, but this article and this one, too summarize the issue among teens.

If you don’t know where to begin when it comes to talking with your kids about prescription drugs, start with this:

Anything that is prescribed for you is for you, it’s not for anyone else and it’s not for sale. Even if you think it could help one of your friends. The inverse is also 100% true: if your name isn’t on the bottle, that prescription isn’t yours and you shouldn’t take it. Sounds simple, but you would be amazing how far a little clarity goes with tweens and teens.

Is it true that kids bring pills to parties and share/dump them in a bowl?  How common is this?

Pill bowls have been around for a long time, and yes they seem to be making a comeback. This may be a function of social media popularizing the allure, or maybe social media just makes the phenomenon look more popular than it really is. Either way, knowing about it opens up an opportunity to talk to your kids. To state the obvious: this intoxication strategy is insanely stupid. If you’re never supposed to take a prescription medication that’s not prescribed for you, then you definitely shouldn’t take one randomly from a bowl… or worse yet a couple. Mixing prescription medications can be deadly.

Explain to your kids that partaking in alcohol and drug use doesn’t have to be a yes or no situation, but rather a delayed situation. The longer they delay consumption of anything addictive, the more likely they will be to enjoy it in moderation later. Kids are smart — They see the world around them very clearly and understand the downward spiral of dependence. They don’t want to go there, so this approach can help them delay the initial use of alcohol or any other mind-altering substance to avoid addiction later.

CARA NATTERSON, MD, is a pediatrician, consultant, and New York Times bestselling author of The Care and Keeping of You, a 3-book series with over six million copies in print. She is a graduate of Harvard College and Johns Hopkins Medical School and trained in pediatrics at the University of California, San Francisco. Cara began practicing medicine in her home town of Los Angeles, where she cared for thousands of infants, children, and teenagers. Eight years later, Cara founded Worry Proof Consulting, the first-of-its-kind practice, offering parents open-ended time to discuss the topics that doctors could no longer squeeze into regular office visits.  She is the Chair of the Board of Starlight Children’s Foundation, a 30-year old charity that brings technology, entertainment, and joy to children in nearly every hospital in America. She is also on the Medical Board of Advisors for The Honest Company and has held seats on the boards of Baby2Baby and The John Thomas Dye School. More than any of this though, Cara’s greatest feat to date is parenting her teenage daughter and her tween-age son with her husband Paul, a beloved cardiologist in Los Angeles.

The Mother Company is on a mission to Help Parents Raise Good People. We do this with our children’s Emmy-winning television series Ruby’s Studio, a series of preschool and early educational picture books, free teacher guides, music and more, all about social and emotional learning.