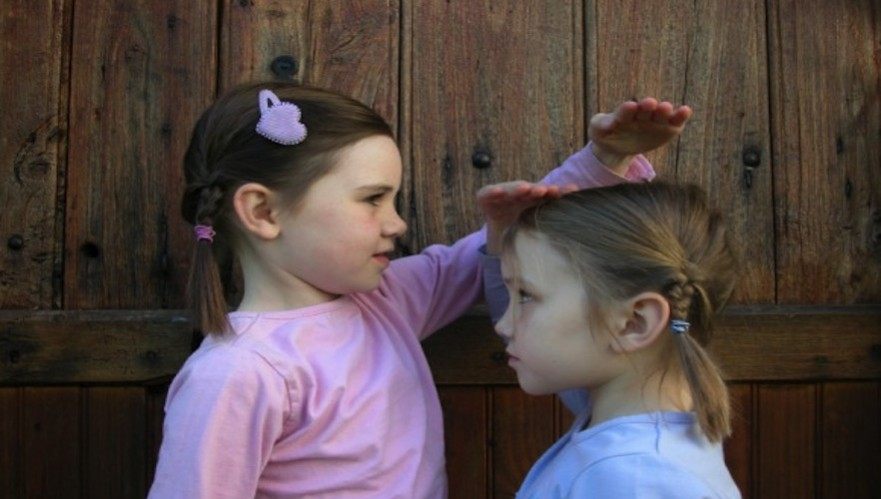 I was five and a half when my sister was born. “Your life will never be the same,” my dad announced when he came home from the hospital. I don’t know if he meant that as a congratulation or a warning, but he was so right.

I was forced to make a sudden and totally unexpected shift from being the center of everyone’s attention to feeling like a complete afterthought. My own five-year-old self-identity was shaken to its core. The change was abrupt and shocking and left me feeling angry, confused, and abandoned.

While I loved having a little sister, I was jealous that she got more urgent attention. I felt jilted that I was no longer the sole recipient of my mother’s affection, leading to regularly moody and vicious behavior.

And so the cycle began. My mother, rather than giving me an understanding ear, would deal with it by mocking me and I would become more upset and angry.

“It’s SNIT time!” she would announce in a singing tone when I showed the slightest bit of upset. And I didn’t know how to respond except to “snit” more. I sulked. I stomped. I became as impossible as possible. Daily, around 5:00 PM, when I was overly tired, needed a snack, and totally ready for some love, the snits came over me.

In an effort to deal with this behavior, my mother changed tactics and started “allowing” snit time — which she scheduled for one hour from 5-6 PM daily. The little playhouse in the back yard became the “snit house” where I was sent during that time to be completely alone. Once the clock struck 6, all the bad feelings had to be over, and I was expected to be back to normal.

While this might have solved the problem for my mother, it was exactly the opposite of what I needed. Being isolated and ignored in my attempts to feel attention and love created a lifelong struggle. I can’t communicate my feelings and needs with ease. And, though it was no fault of my sister’s, we were set up for a lot of competition. Why were my cries disregarded or ridiculed while my baby sister’s were lovingly tended to?

What I needed was my mother’s attention. I needed her to say, “You are so upset. I’m here for you. Let’s spend some special time together.” But she never did. She just got annoyed. My feelings bothered her.

Needless to say, the chasm between needing to have my feelings heard and my mother’s resistance to acknowledge them is one of the reasons I’ve devoted my professional life to social and emotional learning, to better communication between parent and child, and to creating children’s books and videos that help them feel understood.

And when I decided to have multiple children, I made sure to handle things differently. Here are some of the ways we’ve stayed unified as a family:

1. Prep for the good and not-so-good.

Six months before the new baby came, my daughter, who was five at the time, and I started to talk about her role as a big sister.

Though I focused on the good, I also helped prepare her for the not-so-good that would come in the new role. We talked about the baby needing a lot of my time (and why), and I encouraged her to use her words if she felt jealous or needed more attention.

We made visual charts of things she could do as a big sister (pick out clothes), and things she couldn’t do (wake him while he slept). She started to visualize herself in this new role and became comfortable using words for feelings like “conflicted” and “jealous” that were new to her.

2. Understand that the older kids are still little.

When the baby was three weeks old and nursing and my daughter wanted to sit on my lap, I explained that she would have to wait. She became quiet and still and something seemed suddenly different. It was scary.

It occurred to me that she was perhaps having a fantasy of hurting him. Her anger was so palpable. I tried to diffuse it with words. “Are you upset right now?” She nodded. “Are you feeling jealous of your brother?” She nodded again, staring right at him. “Do you… want to hurt him because you’re so mad?” Her eyes met mine and she started to cry, nodding her head. “I understand how you feel, babes. And I’m so glad you are able to stop your body from doing that,” I said.

It was a moment. I was so afraid that my words were giving her ideas, but instead, she felt understood and grateful that her taboo thought was out and deflated.

I had never been faced with that situation before. But neither had she. Now that she’s 11, I think about those moments and how they’ve set us up for honest dialogues throughout. There are mutual respect and trust.

I know labeling kids is a bad thing. Children hear the words you use to describe them and internalize them. But, I wondered, what if we made it work for us? Instead of saying, “she’s my shy kid” or “he’s a handful,” what if we used positive labels that children wanted to own?

Within earshot of our daughter, we would tell the baby how lucky he was to have such a gentle and kind big sister. As a result, she became even more gentle and kind. We also mentioned it when we noticed her displaying those positive behaviors. When the baby was older, we commented on his values as well.

“Patience,” “caring,” and “cooperative” are daily words we use around the kids and it has influenced them to exhibit those traits. Like magic.

4. Love them differently, not equally.

When parents claim to love their kids the same, it sets up a whole mess of situations: constant monitoring over which child gets more attention, more chocolate milk, more birthday gifts.

I say, take “equal” off the table!

Look, no one loves anyone equally. It’s not possible. Everyone is different and so is our love for those people.

I make it clear that I love each child for who they are and that there is more than enough love for both of them. They accept this love and don’t feel the need to monitor who got more dessert. Thank goodness!

5. Guide and step aside.

We learned the hard way that the more we intervened, the more the kids would fight. But letting them fend for themselves wasn’t the answer either. The goal was to coach them to work their conflicts out independently, within our set of “no hurting each other” family rules.

We taught them to use “I feel…” sentences which opened a dialogue. Really, wouldn’t the world be a kinder place if everyone used those? The little guy would say “I feel sad when you don’t share that toy” and she would respond, “I feel upset that you called me a jerk.” And they would hash it out civilly besten kinderwagen .

It isn’t always a perfect back and forth — but they’re learning. And not hitting each other.

When things do get out of hand, my kids know how to bring it back to center. We can’t force them to say it — they have to do it on their own. No one is perfect. Fights will happen. But making amends is an important aspect of any family dynamic. It provides closure and heals the hurt.

Heartfelt apologies, even from parents when we yell or act like momentary a-holes, teach everyone that we feel bad about our behavior and are asking for forgiveness. And learning how to forgive is a value we want our children to have.

Resolving sibling rivalry, boosting harmony, and celebrating family was one of the driving reasons we created Ruby’s Studio: The Siblings Show. It helps give kids the tools they need to communicate and feel understood within the family.

One of my favorite pieces about this show is something I had nothing to do with. On every DVD (not downloads), parents have an optional feature in the menu called “Pop-Up Parenting” — subtitles with exerting advice about the topic of the segment.

As I sat down to watch the Pop-Up Parenting version of the show, these words flashed on the screen:

Most of us know our siblings
longer than anyone else.

Deep connection and comfort forms
because only our siblings know
what it was like to grow up in our home.

Each child must be convinced:
there is more than enough love,
attention & appreciation to go around
— you could never love any one more.

Once children live and believe this,
sibling rivalry softens, &
sibling love has a chance to bloom.

And I cried. I cried tears of sadness for the little girl who was banished to the snit house daily. And I cried tears of relief for the mother I am now with my children who have a profoundly different and loving connection to each other. How far we’ve come in one generation.