Plugged In and Missing Out 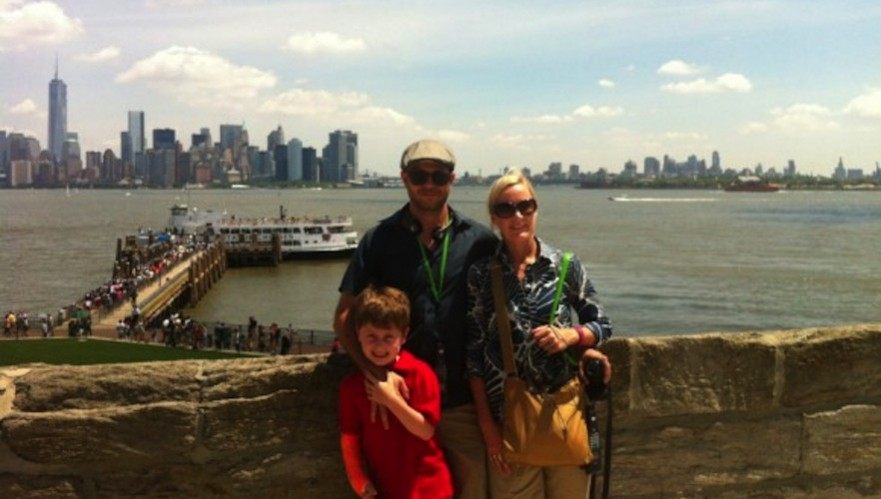 We traveled a ton this summer.  And with the excitement of going to new places – seeing live shows, staying up late, exploring museums, eating unfamiliar food, deciphering accents, mapping out subway routes, riding backwards in the taxi jump seats, swimming in pools on the hotel roof…also comes the drag of waiting in lines, accommodating other’s desires to see a special art exhibit, realizing they don’t make pancakes the same way we do, keeping your voice down in the hotel before 8 AM, and LOTS of in-between time.

And YES, some of those in between times were filled with the almighty iPad.  Shows, games, books – all in the hands of our son who sat quietly so we could get dressed, work out, take a nap on the 11 hour flight and have the occasional adult conversation.

At home, we limit screen time especially during the school year.  But it seems like when summer rolls around, slowly but surely, screen time stretches out like the days themselves.  It happened to us this summer until…

One of our journeys took us to the pedestal of the Statue of Liberty and although it was brutally hot and we knew the line to get back on the boat to Manhattan was going to be incredibly long, WE WERE THERE!  Lady Liberty!  Something we’d been looking forward to since we got off the plane at JFK.

The area was crammed with people from every corner of the world.  A Japanese family was videoing the circling boats.  A German family was smushing together in front of a camera, trying to capture all eight family members AND Ellis Island behind them.  We were doing our best to take it all in – the history, the meaning, the ways in which this monument still serves as a thank you, a welcome, a reminder of who we are as a nation.

Now I was the one transfixed.  I couldn’t take my eyes off them.  I kept waiting for them to realize where they were.  To be interrupted by the couple arguing over whether to take the stairs or the elevator.  To be jostled free by the masses of families squeezing in for photo ops.  For their parents to say, “Enough is enough, turn it off.”

Now, I’m usually NOT a screen judger.  I don’t shake my head when I see a six-year old in a restaurant looking at his father’s phone.  I don’t roll my eyes at the 13 year old in the car next to me texting her friends.  I don’t mumble under my breath, “try having a conversation” as I pass a family staring at the television at the airport.  No, I assume that most parents are like me – interested, engaged, conscientious people who work hard to maintain a healthy balance of media in their child’s life.  And like most moms, I’m also critical enough of myself, that I don’t need others to tell me how I’m getting it wrong.

So here’s where I feel like we’re getting it right.  When we endure the ten straight minutes (which feels more like an hour) of pleading to play a video game, when we patiently answer the “you never let me’s” and “why can’t I ever’s,” and when we yoga breathe through the “just one more show, please, JUST ONE MORE,” without giving in, we’re getting it right.  Because when the ten minutes of pleading ends, and the answer is still, “we’ve had enough screen time today, please turn it off,” it usually turns into something great.  Like my son making a necklace for the housekeeper at our hotel, or drawing a picture of the New York subway system or finding a cocoon in the barn next to our cottage.

I’m grateful for the iPad.  And I’m even more grateful for my ability (most of the time) to know when it’s time to turn it off.

As the new school year begins and I look at the photos of our adventures from the last three months, I think of those two girls.  And I wonder how many other things they missed this summer?  Because their parents (who I do not judge, but do question) didn’t say, “Hey, it’s time to turn it off.  Before you miss it.  All.”

Heidi Fugeman Lindelof  hails from Lexington, Kentucky.  Although she moved to Los Angeles 15 years ago to work in feature films, she’s still a down-to-earth gal.  Lindelof left her 74-hour-a-week job to get married and raise their son, not realizing her new job hours would be WAY more — in both number and satisfaction!