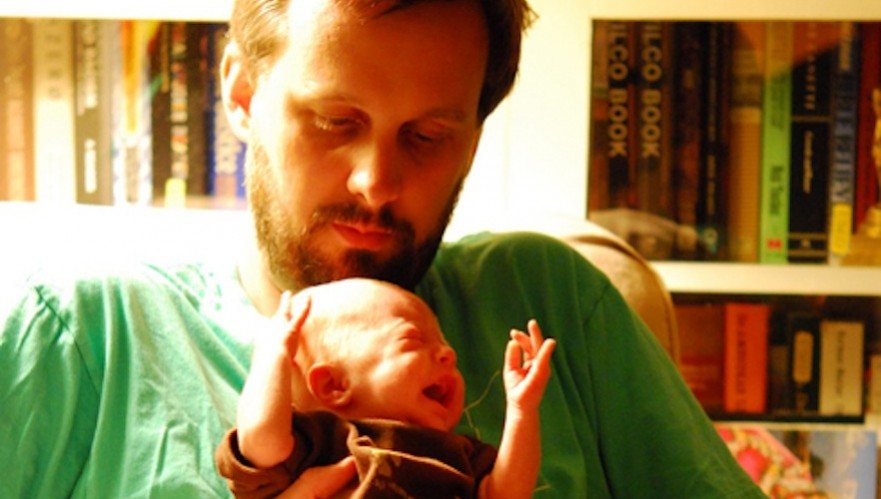 In honor of Father’s Day – we wanted to offer our platform to a dad, Matt Logelin, who inspires us and whose personal story touches us so beyond belief. About 24 hours after his wife, Liz, had a c-section, she was on her way to the NICU to hold her newborn for the first time.  As she turned to sit in a wheelchair, she collapsed and died from a pulmonary embolism. In one brutal moment, Matt had to fill the shoes of both dad and mom.

Here’s a little window into his daily life, excerpted from his book, Two Kisses for Maddy. With much gratitude, we wish him – and all of you – a Happy Father’s Day.

Even when Maddy was just a blurry picture on an ultrasound screen, Liz started fantasizing about taking our baby girl to the spa and dressing her up.

One evening I stopped in Los Feliz (a Los Angeles neighborhood) to take Madeline on the kind on shopping trip her mom would have taken her on—a venture I would have stayed completely out of if Liz had been around. I couldn’t help but worry that with me as her only parental influence, Madeline would be missing out on all the things her mom loved and planned to do with her, so I tried to keep it on my mind all the time. I didn’t think, How should I dress Madeline? I probably would have had a kid wearing hand-me-down flannel shirts fashioned into onesies. Instead, I thought, If Liz were here, how would she dress Madeline?

There was a great a little boutique there that had gorgeous clothes for girls. The prices were astronomical, but I didn’t really care. If Liz had ever bought an expensive dress for Madeline, I would have lost my shit. Kids grow fast and every move they make creates a mess, so to spend any more than five dollars on an outfit seemed outrageous to me. But doing so would have made Liz really happy—not so much because she was spending a lot of money on our child, but because she was doting on her.

I loved that I had discovered this place on my own, without a recommendation from a friend, a blog reader, or even from Liz. I likely wouldn’t have even noticed a kid store if Liz were alive, but now I shopped at this place all the time. On this particular day, I saw an absolutely beautiful dress in the store.

It was khaki colored, with jewel-like buttons and an ornate circular pattern running up and down the seams and around the arm and neck holes. Absolutely gorgeous. I knew that Liz would have loved it, would have bought it, no matter what.

So there I was, a bearded man who looked like he should have been on line to buy tickets for the National, standing in a fancy children’s clothing store shopping for dresses with a little blonde-haired, blue-eyed cherub.

“This is beautiful,” I told the woman behind the counter.

I almost said, “I’m Matt and this is Madeline,” but then I realized she was gesturing at the label.

“Of course,” I said, like I had known that already. In my head, the sarcasm was rampant.

But I knew that Liz would have cared. And to be honest, now I cared. I wanted to do for Madeline what her mother couldn’t do for her, but I also felt that if I could dress my daughter properly, if I could show the people around us that I could match her outfits, the bows and the shoes and the socks, they would know that I was spending time with her, focusing all my attention on her, and that she was going to be okay. So like a good daddy, I handed over my credit card—I figured it was good practice for when my daughter would be demanding designer clothes for her first day of junior high. And then I asked how much it was.

I briefly considered fleeing, but I saw the bitchy look on the salesgirl’s face as I tried to comprehend a baby dress that cost more than my entire wardrobe, and its lace trim caught my eye. I looked at Maddy sleeping in her stroller, and I bought the dress.

With my credit card still smarting from the purchase, I put her and our new cargo into the car. When it was me and Liz, I was thinking, I knew how things would go. I would have followed her lead at the beginning and, as I got more and more comfortable, played an increasingly bigger role in raising our daughter, even doing the little things like making sure her outfits matched. But I had to learn how to care about all the girly things I didn’t grow up with without Liz’s help. I had to close my eyes and imagine how she would have done things, because few things were more important to me than making sure I channeled her influence in Madeline’s life.

Reprinted from “Two Kisses for Maddy,” with permission from Grand Central Publishing, 2011

Matt Logelin was born and raised in Minnesota, and moved to Southern California after finishing his master’s degree in sociology to be with the love of his life, Liz. The two married in 2005, and Liz tragically passed away in March 2008 after the birth of their first daughter, Madeline. A former project manager at Yahoo!, Matt left his job in October 2009 to focus on raising his daughter and on writing his first book, Two Kisses for Maddy. The two live in Los Angeles today, where they enjoy hiking, shopping for records, and eating cupcakes. They travel often to see as much of the world as possible, and have visited six different countries together so far.

The Mother Company aims to support parents and their children, providing thought-provoking web content and products based in social and emotional learning for children ages 3-6. Check out the first episode of our DVD series, “Ruby’s Studio: The Feelings Show“ teaching children how to express their feelings. We want to be a parenting tool for you!